Phnom Penh, January 29: In an effort to encourage more Cambodians to discover the speed and convenience that a quality 4G experience offers, Cellcard has partnered with six leading phone manufacturers to organize the nation’s first 4G Festival.

The “4G Device Festival”, which kicks-off from January 29-31 here, has the telco teaming up with Oppo, Microsoft, LG, Polaris, Meizu and Blackview/Xiaomi to offer consumers a comprehensive range of special 4G smartphone offers, gifts, discounts ranging from 5% to 50% plus free Cellcard bundles. LG 4G-capable smartphones, for instance, come with Cellcard freebies up to $670 while Microsoft 4G-capable smartphones come with goodies up to $660. Cellcard is also throwing in free social packs including unlimited Line and Viber packages for selected smartphone models.

The festival showcases booths featuring not only the latest smartphones but also games, lucky draws and other fun, exciting activities, which include free giveaways of selfie sticks and power banks, among others

“This is a great opportunity for consumers to check out the latest, most affordable phone models from international brands that support 4G-LTE technology,” said Cellcard CEO Ian Watson. “Our aim in organizing this three-day festival is to provide opportunities for more Cambodians to experience the speed and quality of a 4G network with discounted smartphones and free Cellcard bundles.”

Organizer Cellcard is also giving consumers the chance to obtain special phone numbers by simply topping up for a minimum of $1 and subscribing to their XG or Osja plan.

You may be read 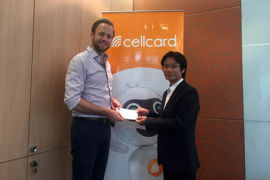 A Cellcard crowdsourcing initiative to support a true Cambodian innovation a...